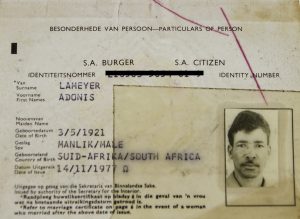 “I am the youngest in our family. We were a big family but many of the children died at a very young age. My mother went to Paarl to give birth to me but I grew up in Oukloof.

We lived in Bos Street in Oukloof. It was the last street next to the bushes at the end of the town and it ran all the way from Hermon Road up to the dam. We walked along a small path to Kloof Street, over the hill by the church and then we were in the town.

My father was in the building trade. He was very well known throughout the area, even up to Moorreesburg. He helped with the construction of the tower of the white church in the town. There is a farmer from Moorreesburg who always asked about my father whenever he came to visit.

We had two houses on our plot. My father built our house with clay bricks that he mixed with lime. It had three bedrooms, a large lounge which we called the front room and a kitchen. There was another small room built onto the kitchen that was used for cooking. We had a large stoep where we sat during the summer time. The ceiling was very high and we stored all our boxes in the attic. When you stood at the old mission church and looked over Oukloof, our house stood high above the rest because of its high roof. When we were naughty as children I used to go and hide in the attic. The people could never find me. I would hear them say “isn’t he maybe in the attic”. Then another voice would say “ but it’s too high, how would he get up there”. Meanwhile I was sitting up there silently waiting for them to stop looking.

We didn’t have electricity but when it was full moon, the whole area was lit by the moon light. During the summer nights everybody sat on their stoeps. We had a grassy patch next to the canal where we played as children. If you looked down the canal, all the children would be playing on the grass along the canal.

Our toilet stood next to the canal and when the dam broke, the toilet was swept away.

Behind our house was the blue-gum trees. It was a thick forest of trees and bushes. When the prisoners escaped from the prison in Riebeek West, they came to hide out in those bushes. As children we often went to play there and that was where we saw them hiding out. Sometimes when I came home from school, they would call me to go and buy stuff for them at the shops. They promised to give me money in return but never did. I once even met a murderer in there. They never really caused trouble with the Oukloof community but one night we caught one of them in our shed. It was crazy how everybody grabbed him and pinned him down until the police came. The police often drove through the area looking for them. They even loaded some of our older children onto the van to help look but we never really told them about the bushes because of the way they treated us.

We had sheep and cows that we farmed with. When we heard the story that we had to move to the vlak [fields], my father started selling the animals to the white farmers. 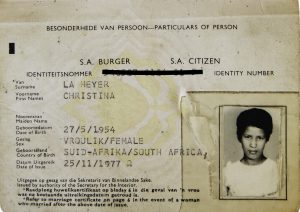 In Oukloof we farmed with animals but here in Esterhof we are not allowed to. We have to apply to the municipality for land and that takes forever.

When we lived in Oukloof we were close to the town but here we are far. It can take you easily an hour to get to town. During summer it is hot and in winter it is wet and cold.

My Oom Lukas Lameyer was very involved in politics in his own way. He always spoke with the farmers about these matters and didn’t take nonsense from them. Whenever he spoke he always used these big words to explain matters. As a boy I always watch him in awe. He spoke his mind and didn’t allow the white farmers to tell him what to do. The white farmers liked to talk to him and I think they respected him. When they started talking about the removals he was the one who spoke up and said it wasn’t right. He was angry and argued with the farmers. He stood his ground but it didn’t really help.

I was still very young when they first started talking about the move. At that time I didn’t ask why we had to move. It is only now that I am older that I want answers. I never really got answers from my mother or father. I have even asked the old white farmers but they don’t have answers for me either. They just said that we have already been paid out so why are we still wanting to know more. The thing is they didn’t pay us out, the government did.
I am not angry, I think I am just hurt by what has happened to our people and where we are today.

When I walk to town I always walk up Kloof Street. It’s sad to think that today there is a house where the church once stood. Sometimes I wonder about where the money for the church land went to. The white people really did as they pleased in those days. They didn’t care. It still continues today.”